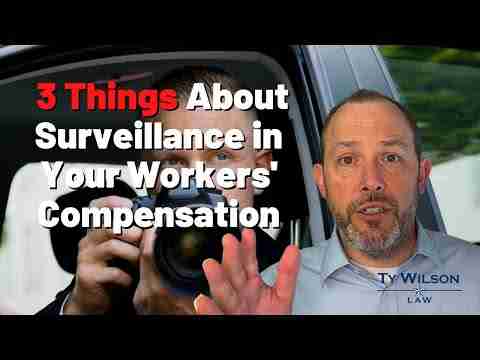 Whether you have just been injured or you are in the middle of settlement talks, or planning to go to trial, you should consider how Workers’ Comp surveillance works in Georgia cases.  While it doesn’t happen in every case, there are times when it does happen.  This article is going to address the three things you should know about how Workers’ Comp surveillance works in Georgia so you can prevent affecting your case by unintentionally falling into a trap.

If you have been injured on the job, here are some things to consider and some scenarios to help you along.  As always, we recommend speaking with an experienced Workers’ Comp lawyer, such as Ty, because the law of worker’s comp can be tricky.  Some cases are fairly easy but others can require a bit more work.  However the following will help regardless of the case.

Why Do They Have Surveillance

Many times we get clients who believe the surveillance is a scare tactic.  That’s actually not why the insurance companies use surveillance .  And if the investigator does his/her job well, you won’t even know that someone is following you.  The investigator’s job is to catch you doing something your doctor said you shouldn’t be doing.  Let’s look at an example from real life.

Norman filed a workers’ comp case claiming his back was injured at work.  He stated that he injured it while lifting something in the warehouse that was within his normal job duties.  He said he was taking all precautions to prevent this injury but when he went to lift, he felt something give way and his back “snapped” and he dropped the item in his arms and further injured himself when he fell.  He could not move so his employer called an ambulance and had him taken to the hospital that day for medical attention.  Since that time, he has been seeing a specialist who has advised that he cannot return to his normal job because he cannot lift anything over 2 lbs. and cannot be bending and twisting until his back has healed.

The insurance company for workers’ comp wants to push back on this because they do not believe he is injured.  One of his co-workers states that he still plays golf every weekend.  To determine if this is true, the insurance company hires a private investigator to follow Norman and see what he actually does each day when he leaves his house.

Now, if they get video of Norman playing golf (bending, twisting, walking long amounts), they can negate his claim.  They will do this by showing these videos and reports to his authorized treating physician or his main doctor and workers’ compensation claim, and they’ll say, “hey, Doc, we know that you said this person couldn’t return to work, but we wanted to show you this video and see if you still believe they can’t do these different things.”

So, in Norman’s case, his doctor sees him out playing golf after telling him he hurt so badly he couldn’t get out of bed most days.  The doctor feels insulted and angry about being lied to by their patient.  Remember this is all happening behind the scenes when the workers’ comp representative is showing this to the doctor.  Norman is not there to explain that he simply had one pain free day and wanted to celebrate it with his family and that he actually was in pain the entire time.  Norman wasn’t there to explain that his daughter actually drove him around most of the time in the cart because he couldn’t do the walking.  Norman wasn’t there to explain that when he bent down to tee off, he had to stay in one position and be sure not to twist.  Furthermore he wasn’t there to explain that his doctor specifically said “no excessive bending and twisting” and he avoided it all as much as he could but needed to be there for his family for just one day. In addition, Norman has nobody on his behalf to state that he does NOT play golf every weekend.  He played that one day and his co-worker knew he would be playing for his daughter’s 18th birthday celebration as a special request from her.

Can this actually happen? Yes.  It can and it does.  We get a lot of calls just like Norman’s.  My first question is usually, “Do you know if there was a video?”  Typically that’s how things change this quickly.  The caller will say, “The doctor didn’t even see me, call me or anything to discuss this! All of a sudden I am released back to fully duty?! How am I going to do that when I can’t even do…” and the first thing we think about is: they have a video of the person doing something they were not supposed to do.  After releasing to full duty, they are going to start trying to shut down the benefits.

How to Fight Workers’ Comp Surveillance

The best way to fight Workers’ Comp Surveillance is to acknowledge that someone may be watching you when you are in public if you are drawing any type of benefits.  It’s best to understand what your limitations are and abide by those limitations.

Contact us Regarding Your Situation with Workers’ Comp Surveillance

If you need help with your workers’ comp case, you can contact us here.

Elizabeth Cook
20:58 09 Dec 22
I cannot recommend Mr. Wilson enough, and go out of my way to let anyone who asks know what a good... man he is. He went above and beyond to help me in more ways than I can truly explain. If you are looking for a lawyer who cares about you and your situation, who wants the best possible outcome for you, and one who will go out of his way to make sure things go as smoothly as possible for you? Please look no further. I am so happy that I decided to go with Ty Wilson Law, and I’m sure you will be, too!read more

Moniyah Harrison
16:38 08 Dec 22
Very happy with Ty Wilson and his law firm. I had a speeding ticket and he responded to my inquiry... promptly. He fully explained in detail how he planned to help, and we were able to get the results we wanted. Would highly recommend to any drivers in the state of Georgia.read more

qiquan zhou
15:46 18 Nov 22
Ty Wilson representatives my case with no problem. I am Chinese and language hard for me. They... answer all my questions and get me out of jail fast and court case closed fast. I very happy with easy communication via phone and textread more

Carli Dee
20:25 14 Nov 22
I called this office around 11am for a consultation. Had an appointment set for 3pm with the... lawyer. And even though i had hired another law firm. He answered all of my questions with love and honesty! And that is hard to find.... Needless to say i will be returning for all of my cases and i definitely recommend!!!!!Dont hesitate call now!❤️TyWilsonread more

Joe Hellesoe
19:35 14 Nov 22
I am so thankful to YouTube when I researched information regarding record restrictions in Georgia... and found lawyer Ty Wilson video.I am so pleased with his service by going above and beyond and do what’s best for my situation.The lawyer fee is fair and if you want results don’t look anywhere else.Ty Wilson law is the place .One last thing to say,thank you lawyer Wilson.read more

Thomas Johnson
07:48 02 Nov 22
TY WILSON IS THE MAN YOU NEED TO GO TO. HE WILL FIGHT FOR YOU AND YOUR BEST INTEREST. HE KEEPS... CONSTANT COMMUNICATION AND BEST OF ALL HE GOT ALL MY TICKETS FROM BOTH COURTS DISMISSED WITH NO HASSLE. THANK YOU SO MUCHread more

McCall Tanner
19:25 23 Aug 22
Very much appreciate the time, attention to detail and help with my case! Would definitely suggest... for trafficread more
See All Reviews